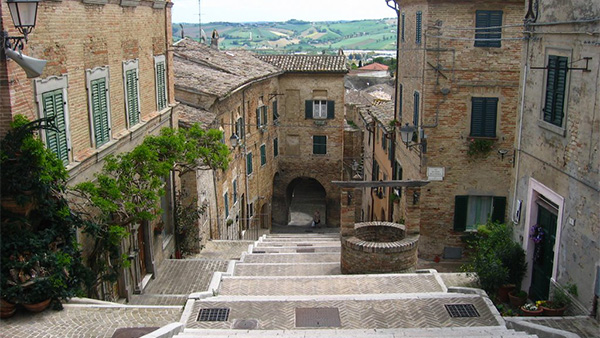 Located in the middle of Via La Piaggia, it was erected by the tyrant of Corinaldo, Antonello Accattabriga, in the latter half of the 15th century, to supply neighbouring homes. It was buried when the staircase was restructured in the early 20th century, only to be reconstructed in 1980 as a venue for the Dispute of the Polenta Well, an annual re-enactment of the fall of the legendary sack of flour into the well.

It is said that the people of Corinaldo used to make polenta in the well, however the truth is that a man once made his way up the town’s beautiful and long staircase (Via Piaggia) with a sack of corn flour on his shoulders.
As he approached the well, he placed the sack on its edge to catch his breath. Unfortunately, the sack fell inside the well. In an attempt to recover the sack, the poor man climbed inside the well and did not go unnoticed by the town’s folk, who began speculating about how he was actually eating polenta which had formed inside the well. Some even swore that they saw him throw a few pork sausages inside the well for good measure. 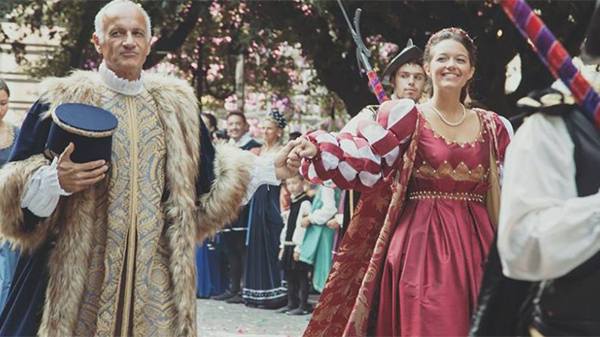 Legend of this episode soon spread beyond the region’s confines, depicting the people of Corinaldo as “nutty” and “cornmeal enthusiasts”. Nutty to ingenious is a short step. The legendary occurrence soon inspired an annual 16th century costumed re-enactment, “La Contesa del Pozzo della Polenta” (the Dispute of the Polenta Well), which was first held in the late 70s and is the oldest historic re-enactment in the province of Ancona.